Jerimiah may have been named after a Revolutionary War soldier Jeremiah Hess.  The Hess family have lived in the Sugarloaf area since the late 1780’s.  The Hess family, Levi Priest (Deborah’s father), Peter Yocum (William’s father) and William Wilson (Peter Yocum’s father in law) were members of the Saint Gabriel’s church in the early 1800’s. The families were also connected by the marriage of Catherine Hess to Samuel Priest (Deborah’s brother) in 1833.  They had six children: Dorothy, Levi, Hannah, Sarah, Mary, and Virginia. After Samuel died in 1850 Catherine marries James Yocum (William’s brother) in 1852 and they had three children: Martha, Lot and Daniel.

Jerimiah’s first wife is Martha S. Goodwin and they marry October 2, 1853.  Martha was born 1830 in Luzerne County. Her parents may be Daniel and Rebecca Goodwin.  Jerimiah and Martha have one child Mordecai Jackson born May 20, 1856 in Moreland, Pennsylvania. Martha passed away in November, 1860.  The Federal 1860 census (Franklin Township, Lycoming County) records Jerimiah living with the Samuel Thomas family and working as a blacksmith.  Some of the 1860 census is unreadable and cannot find where Martha and Mordecai are living.  In the 1870 census Mordecai is living with his father and second wife Julia and he is triaining to be a blacksmith.

Mordecai has one son Maynard Jasper.  Mordecai and his wife Hannah Dorothy Keeler move to Waller, Columbia County. They have seven daughters: Margaret, Anna, Carrie Mae, Bessie, Julia, Bertha, and Dorothy.  Mordecai is a blacksmith and farmer.  He dies in 1939 and is buried in Waller Cemetery with his wife Hannah who died in 1949.

Julia passes December 21, 1915.  She is buried with Jerimiah in the Moreland Baptist Cemetery.

In most of the death certificates of Julia and Jerimiah’s children the name given for their father is Jerry Yocum.

The first photo is Jerimiah’s headstone, the second photo is Yocum lot in Moreland Baptist Cemetery and the third photo is Julia’s death certificate.

Ancestors not to be forgotten. 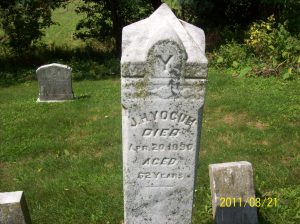